Hraunfossar ( Icelandic for “lava waterfalls” ) is a series of waterfalls in the west of Iceland. The total length of this series of waterfalls is of about 900 meters. These waterfalls plunge into Hvitá river ( Icelandic for “the white river”) which originates on Langjökull glacier and later on plunges down Gullfoss waterfall before flowing into Ölfusá river in Selfoss. Almost right next to them or a bit upstream you find the waterfall barnafoss. The name means “children’s waterfall” which comes from an old story according to which two children who lived nearby fell into the river when crossing it. The natural bridge they had used to cross was destroyed by their mother afterwards.

The waterfalls Barnafoss and Hraunfossar are usually during the same stop in tours which cover the west of Iceland. During day tours other stops which are included are Deildartunguhver and Húsafell.  At Húsafell you find a Restaurant and new hotel, it also is the starting point for tours into the ice tunnel in Langjökull glacier.

If you have more days in the west of Iceland you can also schedule a visit to the Snæfellsnes peninsula. Doing all of west Iceland is too much for one day and you of course want to enjoy your visit without having to hurry.

Another possible visit in the area is the cave Viðgelmir which is not far away and one of the biggest lava caves in the world. 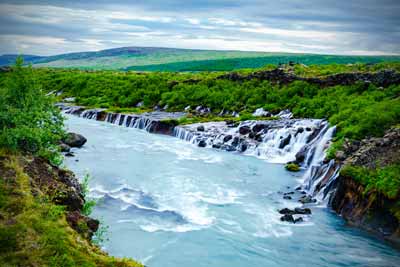 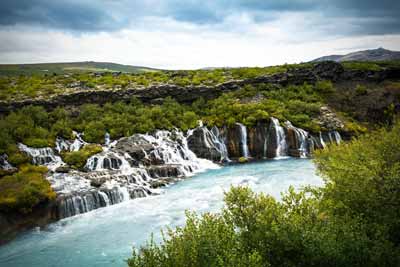 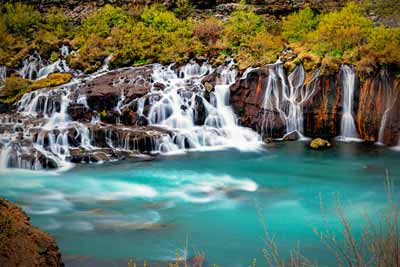