If you drive down Sæbraut street in Reykjavik towards Harpa you will not miss Höfði house. The building was built in 1909 as the residence for the French consul and later accommodated the poet Einar Benediktsson. Since 2015 a statue of him is located next to Höfði.

After him the building was home to the British Embassy until in 1958 the city of Reykjavik purchased the building. From then it has been the site for formal receptions and other official acts.

The most famous event in Höfði was the 1986 summit between Ronald Reagan and Mikhail Gorbachev. The summit took place on October 11th and 12th. Reykjavik was picked to host the summit as a neutral place between Moscow and Washington. This was to let the two meet before a big summit in either capital to make sure a big summit would not be a total failure. Even though the meeting was intended as a meet and greet they were able to talk and almost reach an agreement on matters of nuclear weapons and the militarisation of space (the U.S. were working a project to install a defence system in space).

The ultimate agreement was reached by the two a year later when they met again in Washington. This agreement marked for many the beginning of the end of the cold war.

Not only because of this Höfði is a stop you should not miss during your stay. But also because of the beauty of the house. Located almost next to the water you get a great view of mount Esja to the North, Harpa to the West and the Reykjavik coastline. 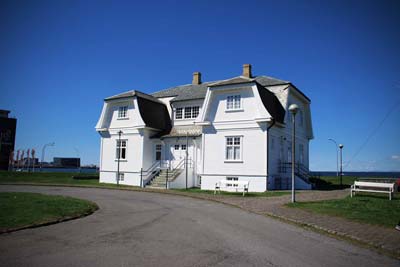