Harpa (Icelandic for Harp) is a concert hall housing the Icelandic philharmonic orchestra. Also other events are organised there such as concerts and conferences.

Construction had started in 2007 and was well on its way. The initial plan included a 400 room hotel next to it as well as apartments, stores and more. But when the financial crisis ( or as we call it here “kreppa”) struck in 2008 the construction came to a hold. It wasn´t until the government decided to fund the rest of the construction that it continued. By then it still did not have a name, which it did not receive until 2009. Before that the working title simple was “The Reykjavík Concert Hall and Conference Centre”. Even after that it took 2 years until it was finished and the opening concert was held on May 4, 2011. It was of course by the Icelandic philharmonic orchestra and it was broadcasted on national television.

The hall  is currently managed by an organisation which is co-owned by the Icelandic government and the city of Reykjavik.

It is the first concert hall in Reykjavik built with this purpose. Therefore there were experts involved as consultants during the building process to be able to provide the best sound possible.  The exterior with the coloured glass is inspired by basalt formations you can find all over Iceland.

Popular events in Harpa include concerts by Icelandic artists. But also international stars have made their appearance. But also shows such as “how to become Icelandic in 60 minutes” have become very popular among tourists.

You can also join a guided visit to Harpa where a guide tells you more about each hall and the architecture. The location right next to Reykjavik Harbour and the center of Reykjavik makes it a nice stop while you're making your way downtown. 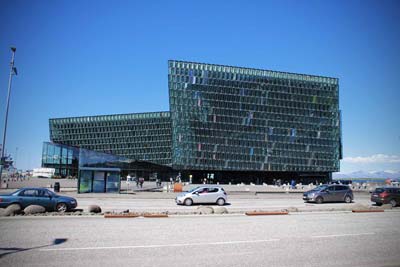 City Break with accomodation in Economy Hotel
Including accommodation in Hotel Cabin or similar. A city tour and the blue lagoon on Friday, the Prime Golden Circle on Saturday and the South on Sunday!
See More