Hallgrimskirkja is one of Reykjavik´s most iconic landmarks.

The church itself is almost 75 meters high offering you a great view over the city. To get up you are charged a small fee which is used to maintain the church.  Even though the construction was started in 1945 after having been commissioned in 1937 it took a long time until it was finished. The parts of the church such as the choir or the crypt beneath the choir had been gradually been consecrated but it wasn’t until 1986 that the entire church was inaugurated.  It is named after Hallgrímur Pétursson who was an Icelandic poet and pastor in the 16 hundreds.

Located at the top of a hill it is very well visible and a great orientation point. In front of the church you find a statue of Leifur Eriksson, the first European settler in North America. The statue being a gift from the United states in 1930 to commemorate the 1000th anniversary of the Icelandic parliament Alþingi.  If you follow him you will walk down Skólavörðustígur street, a very popular shopping street in Reykjavik. It ends at Laugavegur street which is the main shopping street in Reykjavik.

To the left of the church you will find the museum of Einar Jónsson who was an Icelandic sculptor who lived from 1874 until 1954. The museum is in his old house which on the top floor had the living facilities while his workshop was on the ground floor. Now you find exhibits in the ground floor and yard and in the top floor you get a good inside into the living conditions back then. There are also some old photos where you see how lonely it was on the hill before the church was built.

You can discover this museum if you get off the bus during the hop on hop off for example. Or of course if you are staying downtown you can simply walk to the church and its vicinity. 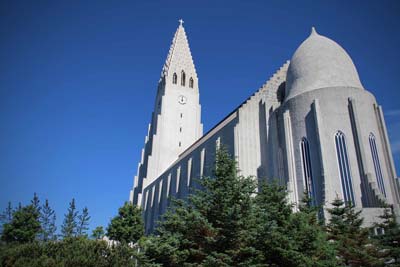